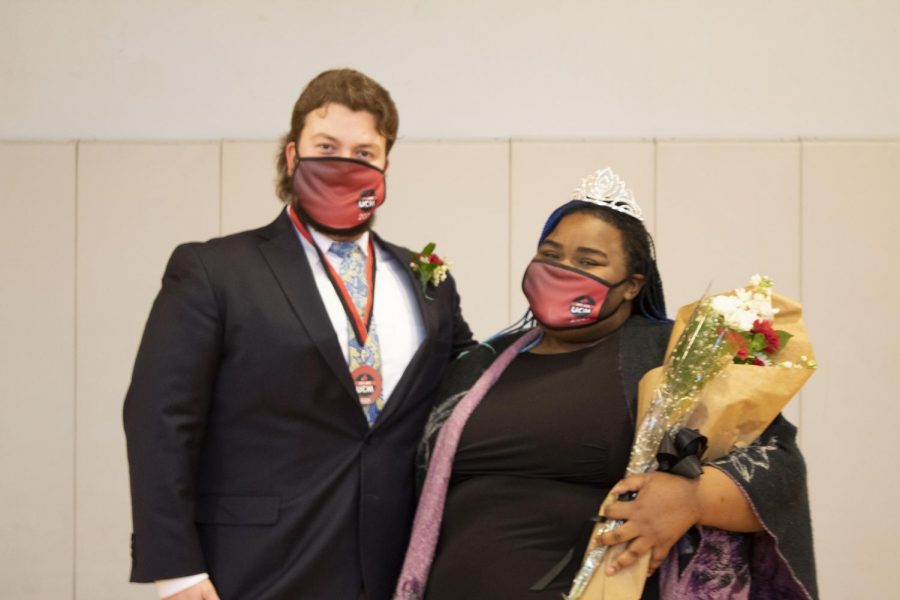 Chance Ridley, Alpha Tau Omega, and Brittané Curry, Alpha Gamma Delta, stand together after being announced as We Are UCM King and Queen at the Student and Wellness Recreation Center on Friday Feb. 12. Photo by Skye Melcher

King and Queen Crowned at We Are UCM Event

University of Central Missouri organizations presented royalty candidates during the first ever We Are UCM event, which celebrated the 150 years of UCM history.

Royalty voting was held on Feb. 9 through a google form posted on the UCM Student Activities facebook page.

Christina Kerns advised the homecoming committee, who organized the We Are UCM. She explained 50% of the candidate’s final point total comes from votes. The judging criteria also includes the interview, which accounts for 25% of the nominees total, and 25% comes from the video the students produced. These portions are scored by independent panels of judges and are also not disclosed.

“I think We Are UCM, even though it’s a single event, I feel like it’s a good accumulation of just every facet of life here at Central Missouri,” Chance Riddle, senior criminal justice major and We Are UCM king, said.

We Are UCM candidates were decided by their organizations before the application process begins, some of the things they took into consideration when deciding was academic standing, involvement and personality.

Each candidate prepared in different ways to promote themself and their organization, many of them made shirts, banners, and posters.

We Are UCM queen Brittané Curry, senior communication studies major, made a shirt and a sweatshirt with her face on it while surrounding herself with positive people to give her hope.

“I have such an amazing support system and I’m so blessed to be able to have won this,” Curry said.

Along with promoting themselves and their organizations, royalty candidates had to research and prepare a video of historical events, figures, or groups from UCM for its 150th anniversary.

Many of the candidates learned interesting facts about the university’s history. Ladies Inspiring Versatility nominee Sarah Edington is senior event marketing management major, and was chosen to research the fire on campus during 1915.

“We all had to do videos about a topic from the history of UCM, and it was a really cool thing,” Edington said. “I got to learn all this stuff that I was like, ‘Wow, I had no idea that happened.”

This is Edington’s first year at UCM, when deciding who would be nominated for the We Are UCM royalty Ladies Inspiring Versatility thought it would be a good idea to present a fresh face to campus.

“It’s interesting, it’s a little bit out of my comfort zone, but I’m really appreciative that they thought that it would be a good idea to have me as the face of the organization.” Edington said.

We Are UCM was held in place of homecoming after it was canceled in the fall due to Covid and nominee Senior communication studies major Kendra Dankenbring, was the member of Sigma Sigma Sigma to be nominated as their queen candidate, and she said she felt honored to be a part of the event.

“I feel like it just shows the ability to adapt, through changing homecoming to We Are UCM, it showed a lot of adaptability through the university,” Dankenbring said.

The university had to consider all safety precautions to host the event and to make sure the student body and faculty were safe while planning a way for everyone to celebrate.

“I think with social distancing procedures and everything going on in the world, the people who put this together did a phenomenal job.” Sammie Gordon,  junior fashion merchandising major and nominee for Gamma Phi Beta said. “Students are very appreciative of that.”